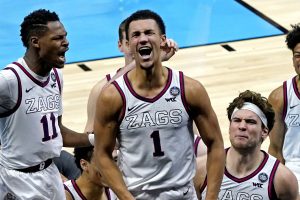 Just ahead of the NBA Draft, superstar prospect Jalen Suggs has signed a multiyear footwear and apparel deal with Adidas, ESPN reports.

“I’m so excited to be with the brand,” Suggs said. “I grew up inspired by D-Rose and Dame and want to follow in the steps of the young Adidas family coming up now like Trae and Don.”

The deal was negotiated by Wasserman. Adidas landed Suggs after highlighting plans for the young star in both basketball and lifestyle footwear categories. The company will also refurbish a basketball court in Suggs hometown of Saint Paul, Minnesota.

Along with the heroes that he outlined in his statement, Suggs will join James Harden on the Adidas brand. Through their tenure, each player received a signature shoe in their third season.

Just yesterday, the projected No. 1 pick, Cade Cunningham, has agreed to a multi-year footwear and apparel endorsement deal with Nike.

“More than anything, they show that athletes are more than just athletes,” Cunningham told ESPN. “They really put the right message out for people to see. That was important to me. … I felt like it was a perfect match for me.”