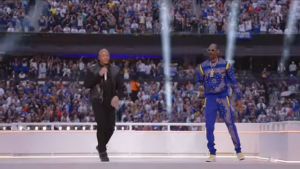 Super Bowl LVI might go down as one of the most legendary Super Bowl’s, not necessarily for the game, but for the halftime show which featured Dr. Dre, Snoop Dogg, Mary J. Blige, Kendrick Lamar, and Eminem, with Anderson .Paak and 50 Cent making guest appearances. In the months following the epic performance, new details about it have come out, many saying that the half time show almost didn’t happen due to differences between Jay-Z and the NFL. However, in a new interview, Dr. Dre admits that he almost dropped out of the performance completely until Nas and Jay convinced him otherwise.

In a new interview with fitness entrepreneur Dolvett Quince’s on his Workout the Doubt podcast, Dr. Dre revealed that he had second thoughts about the show because he thought he would look like a sellout. However, after talking to the two other music legends, he decided to stick to doing the show.

“I got on the phone with Nas. He called me up and was like, ‘Yo bro’ — you know, Nas has that voice — ‘Yo bro, you gotta do it. You gotta do this. It’s gonna be so powerful for f*cking Hip Hop, for the culture, for you, for L.A. and the whole nine.’”

He continued: “We were on the phone for like 10 minutes and he talked me into doing it. Nas and JAY-Z were big reasons why I decided to do the show.”

However, this is not the only time the show’s future was put on the line. Snoop revealed that Jay-Z told the NFL that if the show did not happen then he would quit his role as the leagues live music entertainment strategist.

“We love each other,” Snoop said in an interview with TIDAL in March. “Like, not secretly, like publicly, we love each other. It is what it is, so it’s like for him to go to bat for us and tell the NFL, ‘F*ck that. They perform or I quit,’ that was the most gangster shit out of everything. Then with attire and kneeling and all this … you can’t wear your gang bang sh*t? JAY-Z hit me like, ‘Wear what the f*ck you want to wear. Peace to the Gods.’”

The post Dr. Dre Says He Nearly Dropped Out Of Super Bowl Halftime Show Until Nas and Jay-Z Convinced Him Not To appeared first on The Source.