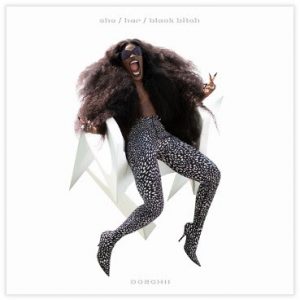 The Tampa native comes out swinging as she flexes her distinct voice and versatile talents that range from quick-fire bars to seductive singing that cement her as Rap’s newest ‘it girl.’

The self-proclaimed ‘swamp princess’ noted that her EP title was a way for her to reclaim the power of being put down in the past. “Many times I’ve been referred to as a “b*tch” as a way to gaslight me out of certain spaces, something I think many people can relate to in one way or another,” says the 23-year-old.

“Lots of people will call you various names for doing something differently. So I decided to take ownership of the ‘Black b*tch’ and title my EP she/ her/ black b*tch and reclaim that motherf***ing power,” Doechii added. “So if you’ve ever been put down for being yourself, just remember you’re powerful and unapologetic- these songs are for you.”

The breakout star had an impressive 2021 gaining momentum with a new audience from her viral TikTok song “Yucky Blucky Fruitcake” and a dope feature on “Wat U Sed” from Isaiah Rashad’s The House Is Burning LP.

Check out Doechii’s 13 minute mixture of Hip Hop, R&B and Electro-Pop, on she/ her/ black b*tch below.

The post [LISTEN] Doechii Drops “she / her / black b*tch” EP appeared first on The Source.