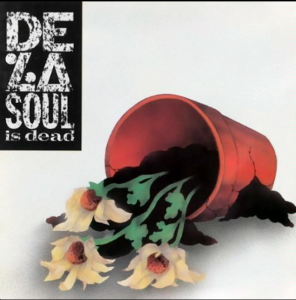 Being one of the first albums to earn the coveted ‘Five Mics’ from The Source magazine, De La Soul Is Dead marked a change in direction for De La Soul. Through this album, De La Soul began to separate themselves from their previous pseudo-1960 flower-child aesthetic set up by their popular debut. Although the title would suggest the end of the group as a whole, the meaning behind the album’s cryptic title is an allusion to the ‘death’ of this old style. The title also represents the group’s separation from mainstream Hip Hop.

Although the group stuck to their skit-heavy storytelling structure, critics and charts were all but kind to this album. Unlike their uber-successful debut, De La Soul is Dead did not appear on any charts and was not recognized as a good album until years after its release. In the late 90s, however, the album rose to critical acclaim when publications realized the impact the album had on the careers of De La Soul and Hip Hop as a whole. The album has been ranked by Rolling Stone, The Source, Pitchfork Media, and others as one of the greatest albums, regardless of genre, of the 1990s.

Following this album, De La Soul went on to be one of the most respected rap groups of their generation. The rebranding that came from De La Soul is dead allowed for De LA Soul to cross over as artists into the realm of respected artistry rather than continuing their career riding the wave set by their debut.