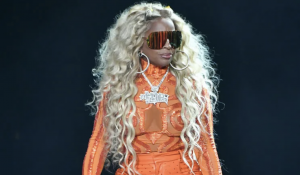 Sistas showed up and showed out at Mary J. Blige’s inaugural ‘Strength of A Woman Festival on Mothers Day weekend in Atlanta. The strength of a woman is about us coming together to heal, to be examples for each other, and to do some partying,” Blige said about the festival. Ahead of her sold-out concert, The Festival which took place all weekend long Features the Gen Z concert that included performances by Omeretta, The City Girls, and Baby Tate, the strength of A Woman Summit, panel discussions that addressed topics in wellness, business, and entrepreneurship A Gospel brunch “The Strength of A Woman Festival is about sharing information. Getting different perspectives on different things and learning different things from different people,” she stated in front of the crowd. “That’s the most powerful thing. All of these women being here. That’s the strength of a woman. Seeing other women being empowered. [My hope is that] women from all walks of life look at this program and say I wish I was there.” Mary didn’t disappoint, mission accomplished her dedication to the advancement and empowerment of women was achieved and felt throughout the entire weekend.  Take a look at the highlights and Mary’s fly ass looks below.

Kierra Sheard, Mary and Le’Andria Johnson at the Strength of A WOman Gospel Brunch