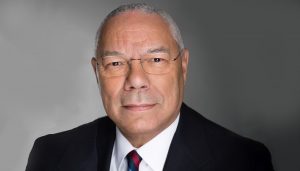 Colin Powell, military leader and the first Black US Secretary of State, has died from COVID-19 complications. Powell’s family confirmed the death on Facebook, CNN notes.

“General Colin L. Powell, former U.S. Secretary of State and Chairman of the Joint Chiefs of Staff, passed away this morning due to complications from Covid 19,” the family wrote.

The family noted he was fully vaccinated and he was 84.

In his career, Powell assisted in shaping foreign policy through numerous administrations. Powell participated in combat duty in Vietnam and became the first Black national security adviser at the conclusion of the Ronald Reagan presidency. Under George H.W. Bush, Powell was the first African American chairman of the Joint Chiefs of Staff. Powell would go on to be Secretary of State under George W. Bush.

Powell is survived by his wife, Alma Vivian (Johnson) Powell, and three children.

The post Colin Powell Dies From COVID-19 Complications at Age 84 appeared first on The Source.

previousWho Hacked The Spotify Page of Tekashi 6ix9ine To Look Like a Rat?