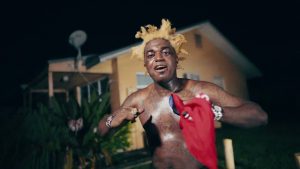 Kodak Black is back again with the release of his new music video, “Senseless.”

Kodak has been making up for lost time with his latest musical efforts ever since he was released in January.

He dropped Haitin Boy Kodak followed-up by the surprise project, Happy Birthday Kodak, on his birthday.

The Florida rapper dropped the visuals accompanied with his new song.

“Don’t make no sense, I catch a body on the scene,” Kodak delivers nasally on the hook after referencing NBA Young Boy’s “Make No Sense.”

“I feel like I’m Kodak Black in 2015/ In the VIP with plenty killas, mixin’ molly with the lean,” he rapped.

Considering their strained relationship, this is an interesting sample for Kodak Black to pick.

Listen to “Senseless” below and let us know what you think:

nextNew Music,“Pink Tape” from Lil Uzi Could Be On the Way