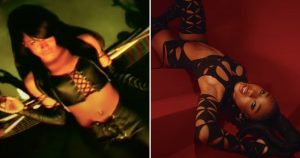 Normani paid tribute to Aaliyah’s legacy with the release of her Cardi B-assisted single, “Wild Side” and the late singer’s uncle approves of it.

Hankerson is the founder of Blackground Records and the man to question about the availability of Babygirl’s music catalog on streaming services. He added, “I believe that Aaliyah would be very supportive of a young Black woman that chose to emulate her music and style.”

Barry did add that it would’ve been “more honorable” if Normani cleared the sample for “One In a Million” but he seemingly approves of it.

“I will not stand in the way of something that brings to light the incredible staying power of Aaliyah. So in that light, wishing Normani well with the song and overall career. God bless. I think Aaliyah would be pleased.”

An attorney for Blackground did confirm that Normani didn’t clear the sample but it’s good to know that Aaliyah’s uncle approves and so does the original producer, Timbaland, who posted a reaction video praising the record.

.@Timbaland singing along to and praising “Wild Side” on his Instagram story.

The post Aaliyah’s Uncle Says It Would’ve Been ‘More Honorable’ If Normani Seeked Sample Clearance For ‘Wild Side’ appeared first on The Source.