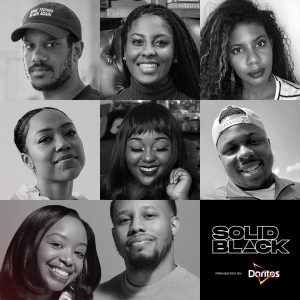 This week Doritos launched their new SOLID BLACK campaign, which is a commitment of $5 million to amplify the voices of Black innovators and creators.

The commercial for the SOLID BLACK campaign aired during the BET Awards and starred actor and singer, Luke James.

The company will donate $50,000 to each “change maker” who is a member of their communities to help them continue their work. Their stories will be spotlighted across all of Doritos’ public channels, including its website, social media, packaging, and TV advertising.

“To further support Black entrepreneurs across the country, Doritos is committing $100,000 to National Urban League, the historic nonprofit civil rights organization dedicated to economic empowerment,” as per the press release.

Fans can also get involved too by donating to the National Urban League and the “first 1,000 people to donate $10 or more will receive a limited-edition Doritos SOLID BLACK bag designed by Megan Lewis, an award-winning artist from Baltimore best known for her ‘Blk Women Period LLC’ series.”

The post Doritos Commits $5M To Amplify the Voices of Black Innovators and Creators with New SOLID BLACK Campaign appeared first on The Source.